2018 NHL Stanley Cup Playoffs start today. I’m going to embarrass myself but whatever…here are my predictions. 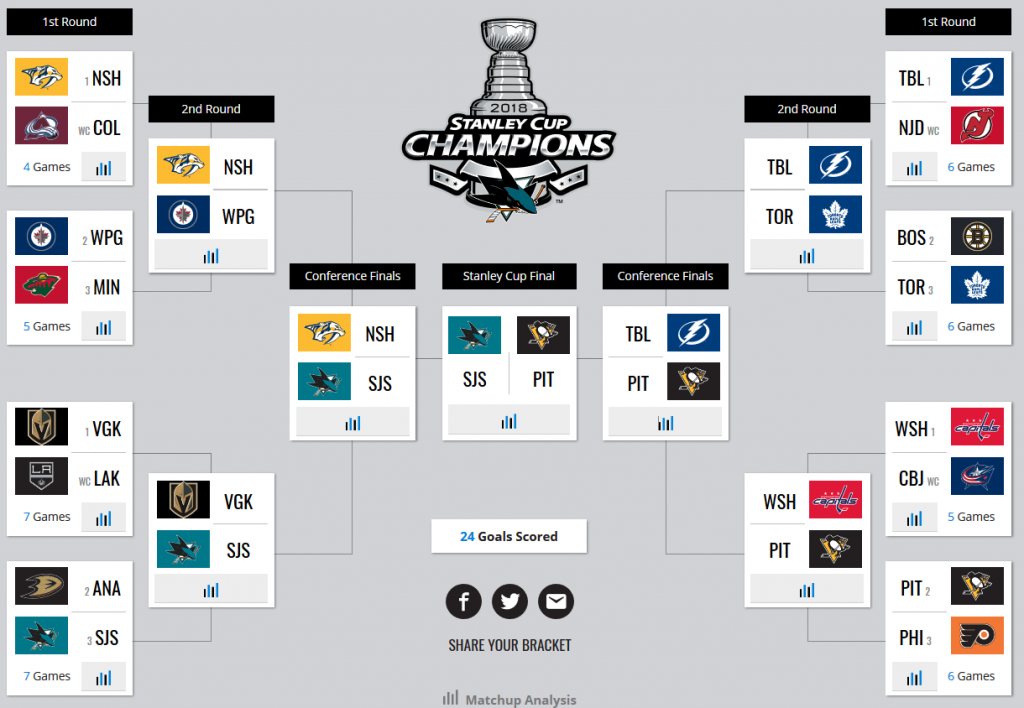 Nashville is OP. Preds have more depth and playoff experience. This it the only match-up that I predict will end in 4 games.

I know next to nothing about these teams but I know that Minnesota’s Ryan Suter is out with a late season injury. Based on that and the two teams’ regular seasons stats, I give Winnipeg a big edge.

Kings have superior players but the Golden Knights have better depth. I’m predicting a long, low-scoring series between these two teams and believe the bottom lines/pairings will win it.

Ducks are spooky but go sharks! I’m predicting that this one will be a tough series, Joe Thornton will play in at least one of the home games, and a lot of penalty minutes but not many power-play goals from either team.

Taylor Hall will go HAM and New Jersey’s top line will give Tampa Bay a hard time, but Tampa Bay is the stronger team. New Jersey not having a solid starting goalie situation will also hurt them.

Boston is a stronger team on paper but I want Toronto to win. Predicting Boston’s defense will not be enough to contain very spread-out scoring between Leafs skaters.

I am expecting some Panarin highlight-reel goals but Capitals’s top two lines are too strong. Washington in 5.

Penguins have too much offensive talent, playoff experience, and leadership to lose this one. I hear Claude Giroux had a spectacular season but the Flyers never once managed to figure out how to beat the Penguins in the regular season. I think it will be a good match up and the games will be close but they will lose in 5 or 6 games.